Just 2 hours left before I set off for my next travel destination: EUROPEAN DANCE CHAMPIONSHIP in Sofia. This time again we are dancing with the blessing and support of the French dance federation. We are very proud to be chosen to represent France at the European Cup 2012. Hopefully, it will be shown on some TV channels and I will be able to post the video link for you!

The downfall of traveling for a dance competition on a weekend is that once again I am missing out my one and only Friday’s French lesson at my college!!! Next week again – the same story, when I am dancing at the Dutch Open in Assen, Netherlands. So, excuse my French ;-), but so far my vocabulary doesn’t go beyond “Vive La France!’ and few swear words from the ‘bad mood’ vocabulary of my lovely French dance partner :-))) 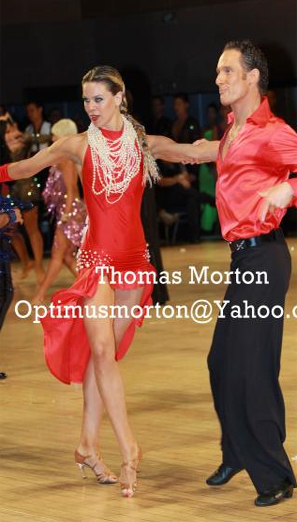 WORLD DANCE CHAMPIONSHIP 2012 is THE competition, that I am so looking forward to! I am packing my suitcase for tomorrow’s early flight to Innsbruck, Austria. (every following WM is happening in a different country, like Olympics). This Saturday we’ll be proudly walking under the French flag at the opening ceremony at the World Masters, representing Florent’s home-country (lucky boy!). Since France has so kindly chosen us to be it’s official representatives, I have started with a French course at the City Lit college. Ironically, I will have to miss my first French class tomorrow because of the World Masters… tough, my mind AND my body 😉 will be with France.

And last but not the least, I attach THE dress for this special occasion, that will experience it’s debut this Saturday evening!

Planning my next dance show for the HSG Alumni London. It is going to be everything but ordinary: featuring political EU crises through the various multimedia, including dance!
The show is called ‘European X Factor’, where main European countries appear in front of the panel of judges as it happens on the popular TV talent show X Factor.
Each country has to prove that it has the x factor and can deliver the results.
With the current turmoil around the poor budgeting skills of many EU countries it is going to be a challenge.
The cast of the show will include some of the alumni from St.Gallen. So, it promises  to be a great evening!